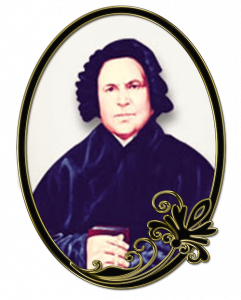 It was in the village called ‘Vers le Creux’ in the parish of Feternes in Chablais, that Claudine Echernier was born on the 29th of May 1801. Her father, Francois Echernier, and her mother, Anne Dutruel, had nine children, four of whom died at a tender age. Poverty was their lot yet they were very rich in faith. They possessed only a small cottage, consisting of a single room with a wooden flooring and a small portion of land whose produce together with the work of the father who was a day labourer, kept the wolf from the door. The parents taught the children to fear the good God. They advised them to be good. That was all they could do.

Claudine evinced from a young age a most astonishing thirst for knowledge and a great spiritual sensibility. At the age of 10, urged by necessity, her parents sent her as a shepherdess to a rich proprietor of Champagnes, Mr. Maillet. At the age of 15, she had the misfortune of losing her mother and had to replace her in tending to her brothers and sisters. Active and diligent, this girl of 15 had made up her mind to become a seamstress. A friend, Miss Poncet, an expert in the trade, taught her the art of cutting and stitching.

But soon, a new trial arose: her father, having yielded to the lure of smuggling, served a sentence of several years in prison. Claudine became at once the head of the little family and the support of the prisoner. Being endowed with a generous heart, she fulfilled these austere tasks with all the vigour of her 20 years. After his release, Francois Echernier remarried. Then Claudine who was 26, being freed from her obligations as a housekeeper, entered the service of the Parish Priest of Feternes, who had just been appointed to the parish of Chavanod.

But her life was so well ordered that no one could point out the least thing that was disedifying; everything breathed piety, modesty, humility, charity and mortification; in a word, she was as exemplary in this parish as she had been at Feternes.